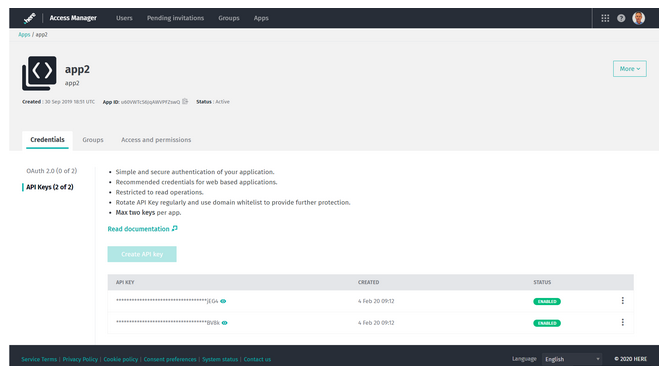 At this time, there are two Platform Location Services that support authentication with API Key credentials (this support is not yet available in China). Using these two examples, you can substitute the API Key credential generated in Platform Access Manager for the "API_KEY_HERE" placeholder text:

Support for additional Platform Location Services as well as support of those services in China will be announced at a later time.

SDK for Java and Scala

Changed: Continued documentation improvements have been made for Java and Scala developers. With this release, the experience is further streamlined by merging this documentation with the tutorials. Detailed dependency information has also been added for the SDK as well as the Pipeline Environments.

Changed: The Data Visualization Library has been renamed to Data Inspector Library to better align it with the naming of the Inspect tab of the Data section in the Portal UI.

Also, this TypeScript-based Library is separated from the OLP SDK for Java and Scala. Java and Scala developers might use the Library for visual debugging of their pipeline apps - mostly though directly via the application in the Portal UI. At the same time, other audiences can create their customized Data Inspector app to allow users without Platform access to review Platform data through a hosted service.

To read about more updates to the SDK for Java and Scala, please visit the HERE Open Location Platform Changelog.

Issue: A finite number of access tokens (~ 250) are available for each app or user. Depending on the number of resources included, this number may be smaller.
Workaround: Create a new app or user if you reach the limitation.

Issue: Only a finite number of permissions are allowed for each app or user in the system across all services. It will be reduced depending on the inclusion of resources and types of permissions.

Issue: All users and apps in a group are granted permissions to perform all actions on any pipeline associated with that group. There is no support for users or apps with limited permissions. For example, you cannot have a reduced role that can only view pipeline status, but not start and stop a pipeline.
Workaround: Limit the users in a pipeline's group to only those users who should have full control over the pipeline.

Issue: When updating permissions, it can take up to an hour for changes to take effect.

Fixed: Resolved an issue found post production release to support backward compatibility of Catalog version dependency HRN comparisons (used in version resolution). With the rollout of the new Catalog HRN format including OrgID (i.e. realm) in OLP 2.9, the Catalog dependency version resolution function would not successfully find compatible versions when the dependencies contain a mix of Catalog HRNs using old and new HRN formats. To address this issue, the following changes were made globally after the OLP 2.10 release:

Deprecated: Catalog HRNs without OrgID will no longer be supported in any way after July 31, 2020.

Issue: The changes released with 2.9 (RoW) and with 2.10 (China) to add OrgID to Catalog HRNs and with 2.10 (Global) to add OrgID to Schema HRNs could impact any use case (CI/CD or other) where comparisons are performed between HRNs used by various workflow dependencies.  For example, requests to compare HRNs that a pipeline is using vs what a Group, User or App has permissions to will  result in errors if the comparison is expecting results to match the old HRN construct.  With this change, Data APIs will return only the new HRN construct which includes the OrgID (e.g. olp-here…) so a comparison between the old HRN and the new HRN will be unsuccessful.

Workaround: Update any workflows comparing HRNs to perform the comparison against the new HRN construct, including OrgID.

Issue: Versions of the Data Client Library prior to 2.9 did not compress or decompress data correctly per configurations set in Stream layers. We changed this behavior in 2.9 to strictly adhere to the compression setting in the Stream layer configuration but when doing so, we broke backward compatibility wherein data ingested and consumed via different Data Client Library versions will likely fail. The Data Client LIbrary will throw an exception and, depending upon how your application handles this exception, could lead to an application crash or downstream processing failure. This adverse behavior is due to inconsistent compression and decompression of the data driven by the different Data Client Library versions. 2.10 introduces more tolerant behavior which correctly detects if stream data is compressed and handles it correctly.

Workaround: In the case where you are using compressed Stream layers and streaming messages smaller than 2MB, use the 2.8 SDK until you have confirmed that all of your customers are using at least the 2.10 SDK where this Data Client Library issue is resolved, then upgrade to the 2.10 version for the writing aspects of your workflow.

Issue: Searching for a schema in the Portal using the old HRN construct will return only the latest version of the schema.  The Portal will currently not show older versions tied to the old HRN.

Issue: Visualization of Index layer data is not yet supported.

Issue: A pipeline failure or exception can sometimes take several minutes to respond.

Issue: Pipelines can still be activated after a catalog is deleted.
Workaround: The pipeline will fail when it starts running and will show an error message about the missing catalog. Re-check the missing catalog or use a different catalog.

Issue: If several pipelines are consuming data from the same Stream layer and belong to the same Group (pipeline permissions are managed via a Group), then each of those pipelines will only receive a subset of the messages from the stream. This is because, by default, the pipelines share the same Application ID.
Workaround: Use the Data Client Library to configure your pipelines to consume from a single stream: If your pipelines/applications use the Direct Kafka connector, you can specify a Kafka Consumer Group ID per pipeline/application.  If the Kafka consumer group IDs are unique, the pipelines/applications will be able to consume all the messages from the stream.
If your pipelines use the HTTP connector, we recommend you to create a new Group for each pipeline/application, each with its own Application ID.

Issue: For Stream pipeline versions running with the high-availability mode, in a rare scenario, the selection of the primary Job Manager fails.
Workaround: Restart the stream pipeline.

Issue: Lack of usage reporting for Location Services released in version 2.10 (Routing, Search, Transit, and Vector Tiles Service)
Workaround: Usage is being tracked at the service level.  Following the 2.12 release wherein usage reporting is expected to be in place, customers may request usage summaries for usage incurred between the 2.10 release and 2.12.

Issue: When the Technical Accounting component is busy, the server can lose usage metrics.
Workaround: If you suspect you are losing usage metrics, contact HERE technical support for assistance rerunning queries and validating data.

Added: You can now use the SDK for Java and Scala with Jupyter notebooks on AWS EMR environments.

Summary of active deprecation notices across all components 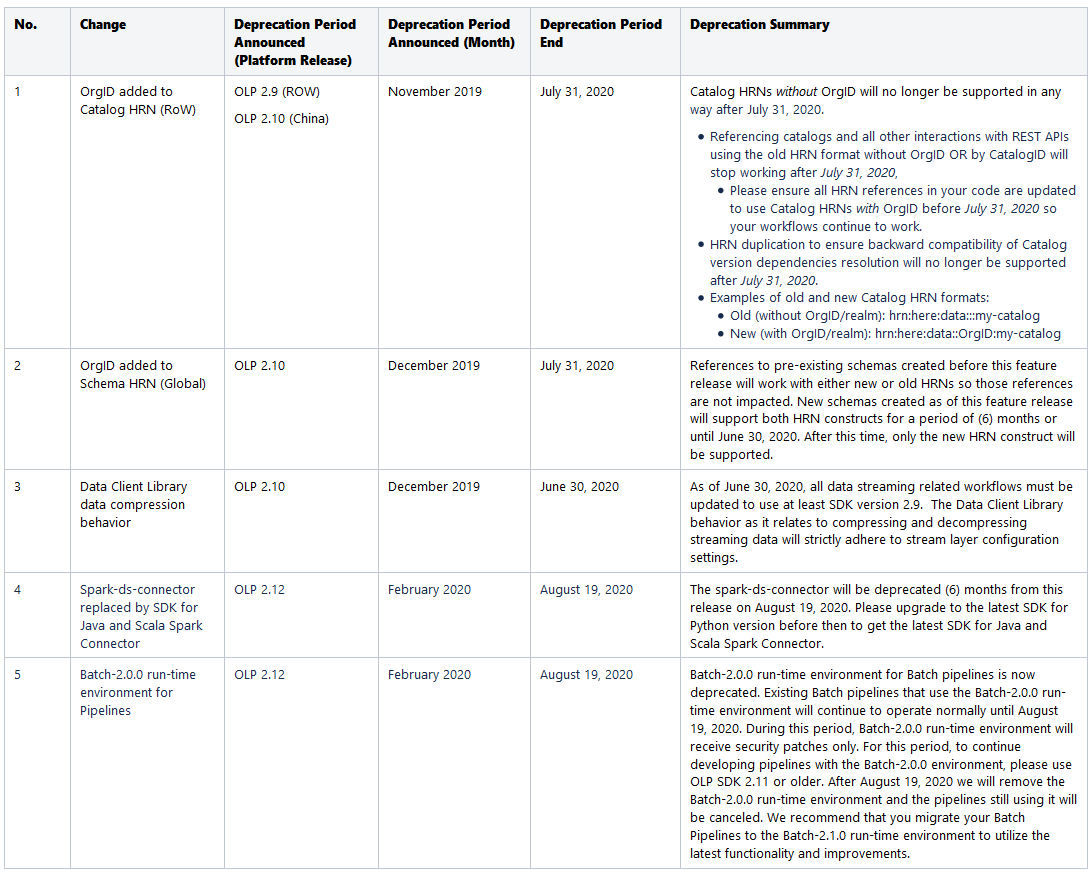