Showing a HERE Map with the Vue.js JavaScript Framework 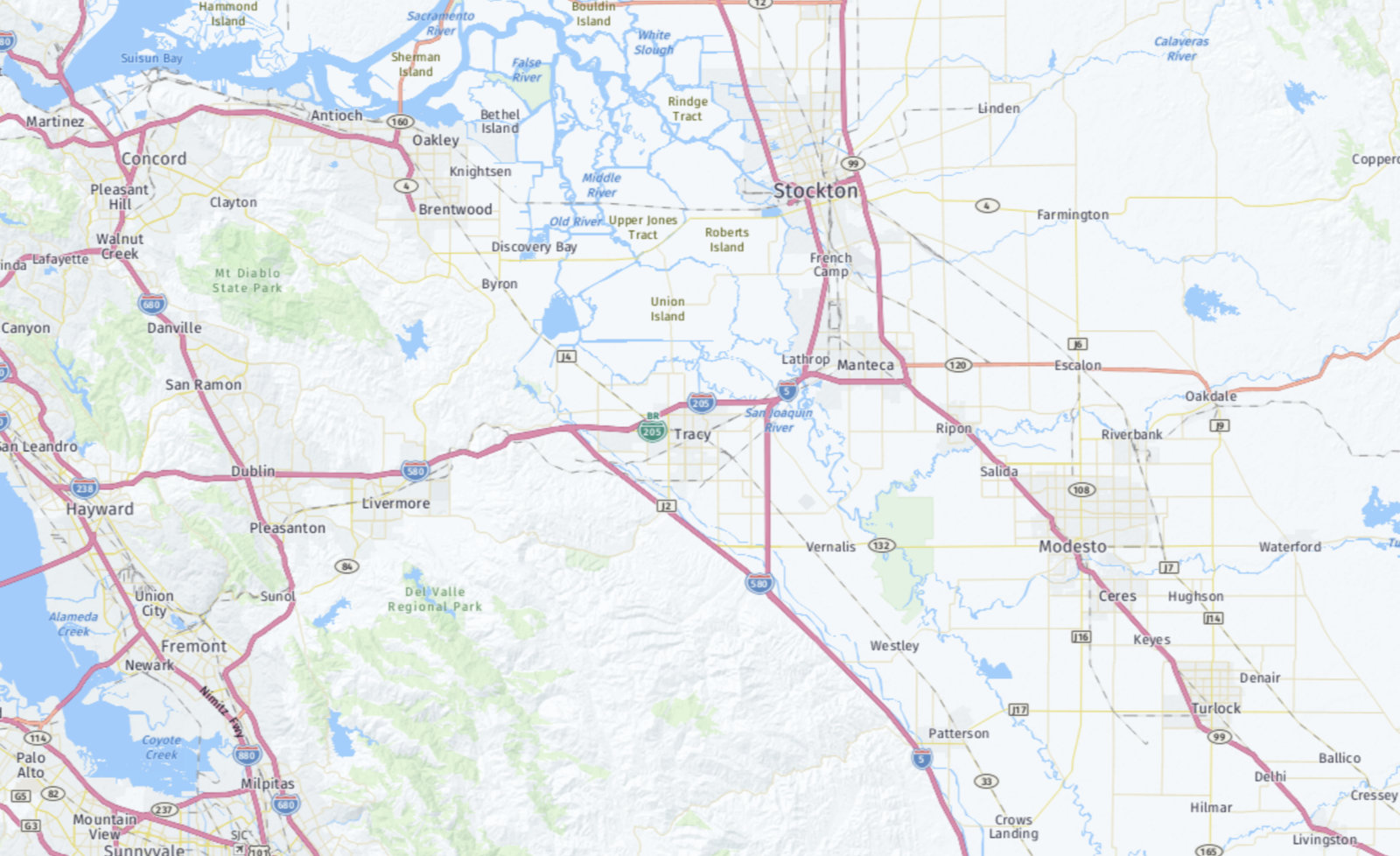 When developing a modern web application, very rarely does one use vanilla JavaScript when creating the frontend. HERE offers a JavaScript API for displaying and working with maps, but what if you’re using a modern framework? Previously I had written a tutorial titled, Displaying HERE Maps within your Angular Web Application which demonstrated getting set up with Angular, but what if you’re using another popular framework like Vue.js?

We’re going to see how to use the HERE Maps API for JavaScript within a web application created with the Vue.js JavaScript framework.

The goal of our application is simple, show a map on the screen, and it can be seen in the image below. 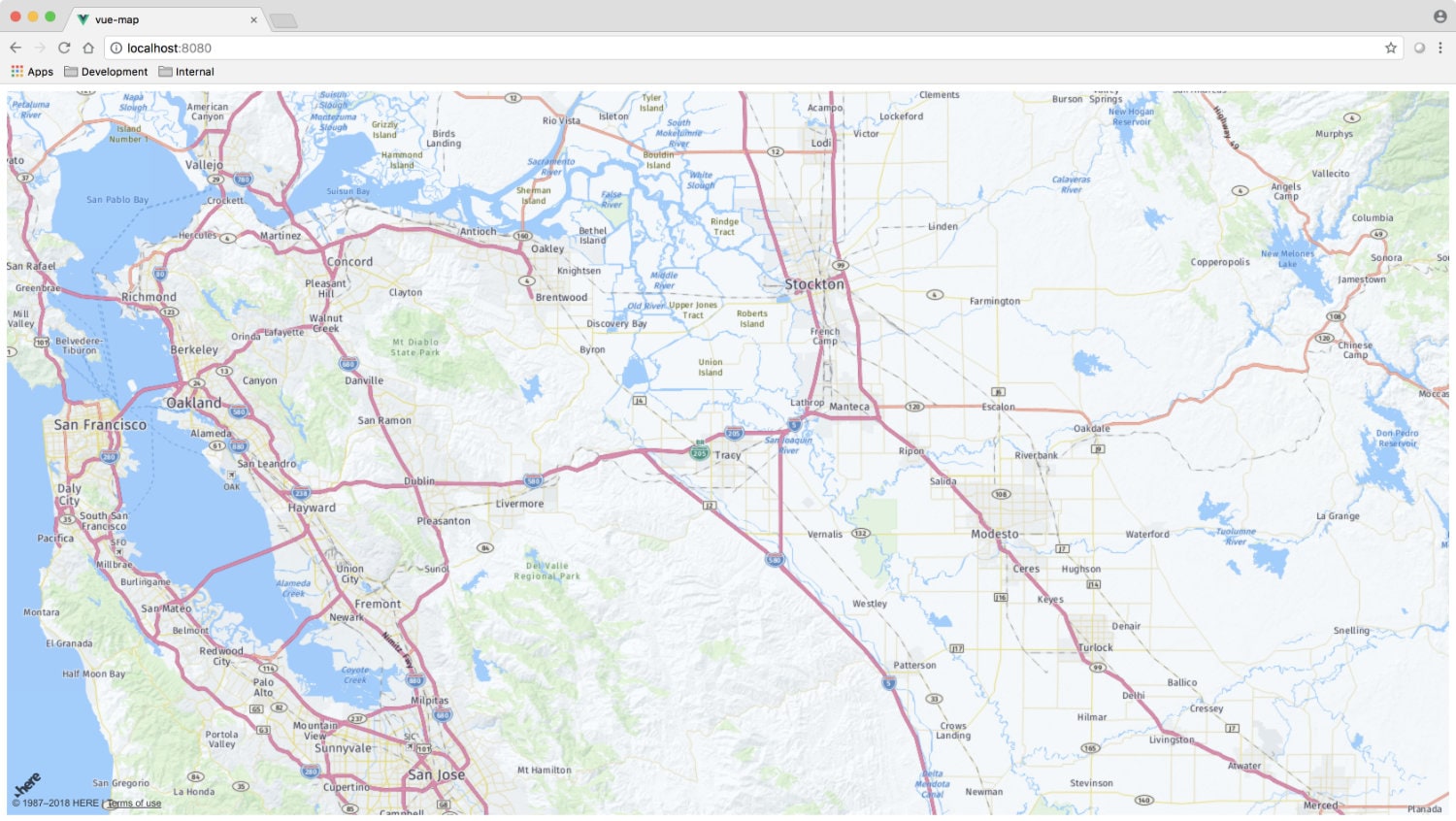 The process involved will include working with native DOM elements, reusable components, and user defined properties that are bound to the map component and dynamically changeable.

To be successful with this project, there are a few requirements that must be met prior:

To work with HERE maps and other location services an account must be established. This can be done for free from the HERE Developer Portal. While not absolutely necessary when working with Vue, this particular tutorial will be making use of the Vue CLI. It can be obtained through the Node Package Manager (NPM).

Creating a New Project with the Vue CLI

For simplicity, we’re going to start with a new Vue.js project. With the Vue CLI, execute the following command:

For this particular project we will not be using anything beyond the defaults when prompted by the stages of the Vue CLI. This means don’t worry about the Vue Router or Vuex.

When the project has been created, you can run it at any time by executing the following:

The above command will serve the application which is great for testing. When you’re ready to deploy the application, you’ll probably want to build it instead of serving it.

When using vanilla JavaScript, you’re probably familiar with adding map code where it is needed. This causes a lot of duplicate code to exist and isn’t really scalable for the long term. While we could do it this way in a Vue.js application, it makes sense to create a dedicated map component instead.

Before we create the map component, let’s focus on including the appropriate HERE JavaScript libraries. Open your project’s public/index.html file and make it look like the following:

The lines that are important to use are the two scripts at the bottom. These scripts were taken out of the HERE documentation and will allow us to use HERE within our Vue.js components.

Within your project, create a src/components/HereMap.vue file with the following code:

As you can see in the above code, it is very incomplete. However, notice that we have a <template>, <script>, and <style> block. For the extent of this application, the <style> block will remain empty, so let’s ignore it going forward.

Because of how simple our UI is going to be, let’s focus on the <template> first. It should contain the following:

There are a few things to note in the above HTML markup. First, notice the ref attribute. Because we are going to have direct interaction with the DOM component, we need to create a variable that references it. The variable is map and it will be accessible from our <script> block when we make it there. Next, notice the v-bind:style attribute. We’re going to let the user define some dynamic styles. For the object, the key is the HTML style property while the value is actual a variable that will be found in the <script> block.

Not too bad so far right?

The props and data will look like the following:

Vue.js has a few lifecycle hooks that are executed when an application or component loads. One of the first is the created method:

When the created method executes we will initialize the HERE platform. This will include taking data from our bound properties and setting one of the component variables. Because the map is a DOM component, we need to wait until the components have rendered before we try to work with it, so we can’t do it in the created method. Instead we can use the mounted method:

In the mounted method, we use one of our component variables as well as the ref variable that was set via an attribute in the HTML. Finally, the lat and lng data comes from the component attributes.

More information on the Vue.js lifecycle hooks can be found in the official Vue documentation.

Displaying a Map in the Web Application

Now that we have a map component, we need to use it within our application. Given that this is a simple application, we’re going to be using it within the project’s src/App.vue file. Open this file and include the following:

Again, we have a <template>, <script>, and <style> block. You can choose not to use the default styles, or leave them in. In the above code, it is the defaults. Before we can use the HereMap component, we need to import it and include it in the <script> block. Once we’ve done this, we can use it in your HTML. Notice that the component attributes match those that we defined in the props object of our component JavaScript.

Don’t forget to change the appId and appCode with yours before trying to run the application.

You just saw how to use the HERE Maps API for JavaScript to display a map within a web application created with the Vue.js JavaScript framework. As you probably noticed, most of the work that we did was more or less Vue.js configuration and not so much on the map configuration. This is typical for any frontend framework, however, once it is configured, development remains smooth.

If you’re an Angular developer and you want to see this same tutorial for Angular, check out the previous tutorial that I wrote on the subject.